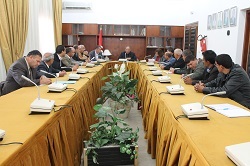 Achieved Regional Commissary for Agricultural Development Monastir to find solutions to the problem of providing soil Monastir irrigation water for the cultivation of 500 hectares of potatoes Badriyah characterized by planted.

The Regional Commission for Agricultural Development Monastir on November 21 last year had informed the direction of peasants learned not to the possibility of the current culture of the apple growing season soil, due to the imprisonment of precipitation during the last period and lower the water level to fill Nnbhana which provided Monastir hand over about 7.5 million cubic meters of irrigation water through each agricultural season.

Bashir Ben Aicha regional delegate of Agriculture Monastir was announced at a meeting held on Tuesday evening at the headquarters of the state under the supervision of Mr. Tayeb Nefzi governor of Monastir and the presence of representatives of the water control boards, that, according to the session at the Office of Planning and water balances held at the Ministry of Agriculture and December 11, 2014 After examining the state of water resources available to fulfill Nnbhana and consider the possibility of providing system Nnbhana network of National Water Company for the operation and distribution of water, were achieved by the Ministry of Supervision and any intervening allow farmers Monastir water needs for growing potatoes not, and it is 80 parts per programmed spaces and later 20 January 2015 for the cultivation of potatoes Badriyah characterized by agriculture Monastir, which represents 30 of the national space and contributes to about 15 000 tonnes of potatoes marketed during the months of April and May of each year.

He added that the procurement process for irrigation water to extract all the rest depends on the remaining debt to the synagogues of the water and the proper use of the available water resources in irrigated areas and ensuring that water economy irrigation and aquatic vegetation giving their needs is not. In this context, said Ben Aicha attracting irrigation debt ratio of water by aquatic complex management boards and 15 rooms and over 99 Moreover, the share of the economy in the areas of irrigation water wheel 100.